Reflecting on his time as a young missionary, Asian and Near Eastern Languages Professor Van C. Gessel admits with a smile that he’s been responsible for more than his fair share of cultural confusion.

“My misunderstandings began in 1970, the first time I went to Japan, as a 19-year-old missionary for the LDS Church,” Gessel said. “During the two years there, I struggled to learn the Japanese language and the Japanese people kindly struggled to understand what I was trying to say in their language.”

But those two years were poignant enough that Gessel was determined to learn as much as he could about Japan—its culture, customs, beliefs and values—to help him better understand the people he’d grown to appreciate and love.

That determination lead to a 35-year career of studying and teaching Japanese literature and culture, and has now earned Gessel a formal commendation from the Minister for Foreign Affairs of Japan.

“In his career Dr. Gessel has made outstanding contributions to mutual understanding and goodwill between Japan and other nations,” Consul-General Makoto Ito said during the commendation ceremony at the Grand America hotel this month. “He is an accomplished and respected authority on Japanese literature and culture, and especially noted for his translation and research on Mr. Shusaku Endo’s work, which has led to enhanced cultural exchanges between Japan and the United States.”

Gessel is one of a select number of non-Japanese citizens to receive a commendation from the Foreign Minister of Japan. The accomplishment underscores the goal to build bridges with the nations and cultures studied within the College of Humanities.

“In the case of Professor Gessel, he not only builds bridges, but also actively advances the understanding of an important Japanese writer, both within Japan and abroad,” said Scott Miller, dean of the College of Humanities. “He brings great honor to the college through his dedicated study of Shusaku Endo, a Japanese author who, as a Christian minority, managed to identify and explore some of the most fundamental questions posed by Christianity as they play out in a very non-Western culture.” 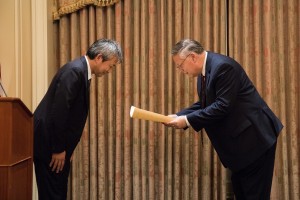 In addition to honoring Gessel, the commendation ceremony also recognized BYU alumna Dr. Jeanette Misaka with an Imperial Decoration from the Emperor of Japan. In her youth during World War II, Misaka experienced the internment of Japanese-American citizens. She has been a dedicated member of the Japanese American Citizens League for more than 50 years, and received her PhD from BYU in 1992.